In the Yellow Time of Pollen

Welcome to the first day of Spring! Do you have itchy wand watery eyes? Are you suffering from symptoms of hay fever or asthma? Here is a summary of the 2020 winter pollen season and are a few pointers to help you navigate the beautiful, but sometimes challenging, spring months ahead.

If anyone has been walking around Lake Burley Griffin in Canberra during the last week of August they would have noticed some beautiful but curious clouds of yellow "dust" forming a slick on the surface of the lake. These clouds in the water are signs of a highly productive pollination event marking the beginning of the Pine pollen season that usually lasts from August through to early October. Masses of yellow pollen are carried on the wind across the landscape creating dusted cars, footpaths and the curious patterns we see in the lake (see image below), creating a swirl of beauty, wonder... and anxiety as the hay fever season has arrived in full force around Canberra. We truly are in "The Yellow Time of Pollen" [Luke Davies]

The Canberra Pollen Monitoring Program has been collecting daily pollen counts over the winter months and from the graph below it is clear that we have experience 12 days of HIGH (>50 pollen grains/m3) pollen counts - 7 days of which were in the EXTREME level (>100 pollen grains/m3). The last week of August saw a succession of days with EXTREME levels and this clearly contributed to the yellow pollen dusting and slicks seen around the city. In 2019 the winter pollen season saw only 4 days of EXTREME pollen levels and the Pine pollen season began more than a week later in early September compared to the late August rise in pollen levels recorded in 2020. At least part of the explanation may be levelled at the higher winter rains (July+August rainfall 2019=23mm: 2020=140mm) and recent strong winds experienced in July-August 2020 bringing greater tree productivity and higher airborne pollen levels compared to the same period in 2019. 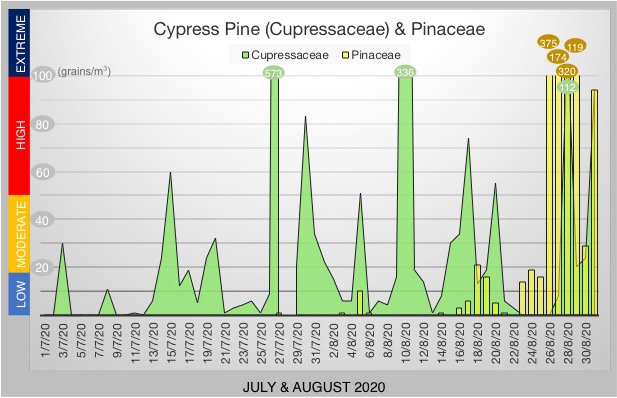 Figure 2: July-August 2020 pollen count showing the daily pollen counts for the most abundant pollen types Cypress Pine (Cupressaceae) and Pine (Pinaceae). Standard pollen level classifications are given on the y-axis alongside the daily count recorded as pollen grains/m3.

National Wattle Day celebrates our national floral emblem and is a symbol of diversity and unification in Australia. Many people associate hayfever with pollen from trees that are visibly flowering in late winter and early spring and in many cases the wattle has been unfairly maligned as the culprit for those itchy eyes and running noses at this time of year. Wattle pollen is a relatively large pollen grain made up of 16 segments and its sticky coat is readily picked up by pollinating insects and birds or, if missed by the pollinators, it falls to the ground close to the flowering parent tree. We very rarely see Wattle pollen in our daily pollen counts in Canberra and we have found no evidence that it forms a significant component of airborne allergenic pollen in Canberra.