Why is Canberra the Hay Fever Capital of Australia?

Ever wondered why Canberra is the hay fever capital of Australia? Is it related to the population make up, climate or geography? According to national health surveys, allergic rhinitis rates are the highest in the ACT (Canberra), where 1 in 5 people reported suffering from long-term allergic rhinitis, followed closely by Western Australia, Victoria and South Australia. The lowest rates occur in Queensland and New South Wales, which is almost half that of Canberra.Why is this the case? One possibility is that there are simply more people in Canberra who are susceptible to allergic rhinitis. However, there is no evidence that the population of Canberra differs significantly in terms of demographic indicators, such as birthplace or age, from other regions in Australia. 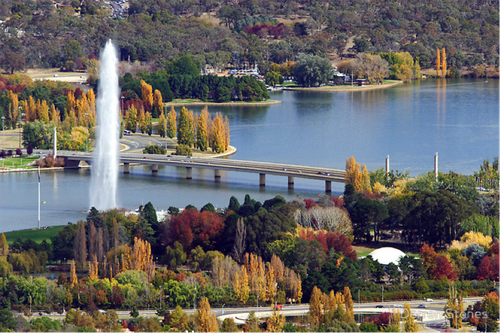 Here I explore the possibility that at least part of the explanation might lie in the diversity of plants producing allergy-related pollen. The Atlas of Living Australia is an amazing online database of the diversity and distribution of plants found across Australia. It also has useful analytical tools that help you map the occurrence of any species you might be interested in. By compiling a list of the main allergy-related introduced tree and herb species* found in Australia I used the ALA to map their spatial diversity and to see where the species richness hotspots occur.

The map below reveals some interesting patterns and hotspots of allergy-related species richness across Australia. First of all it is clear that the capital cities of the southern states hold the greatest number of allergy-related plant species, reflecting the long held habit of city councils to plant many exotic tree species into our urban landscapes. 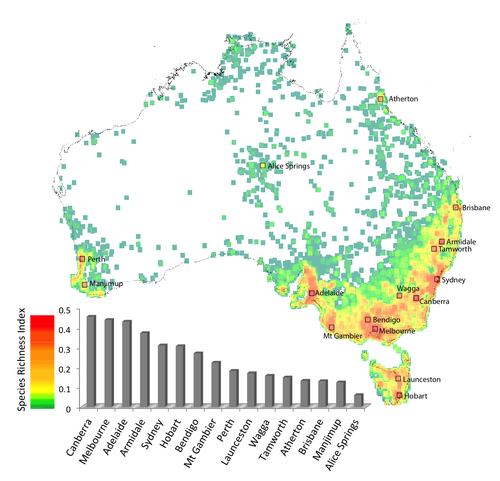 The geography and climate of Canberra has a lot to do with its status as the nations number one hotspot for hay fever. Its land-locked location in the heart of a rich agricultural region, plus a climate and urban landscaping history that supports plants from both cool and warm temperate origins, means that there is little chance for relief during the months when allergy-related plants produce pollen. Based on historic counts of airborne pollen in the ACT, the season for allergy-related pollen can begin as early as August (dominated mostly by Pine, Birch and Cypress), peaking in October to November (dominated by the grasses) and extending into January and February (including warm climate grasses and Plantain).

As the climate warms and the population grows in Canberra (and other regional hotspots) it will be important for allergic rhinitis sufferers, health experts and city landscape planners to be aware of the potential impact that environmental change can have on population health. Education and awareness about the distribution and impact of allergy related plants on population health and productivity will help to better guide our daily decisions as we live in and seek to create desirable urban and rural landscapes.