Why am I sneezing and wheezing so much!?: Mid-Grass Pollen Season Update for Canberra

We’re now at the midpoint of Canberra’s grass pollen season, a season that typically peaks in November and declines as the end of the year approaches.

In early October, we forecast an above average grass pollen season for 2021 based on a wet winter, high soil moisture and predictions of above average spring rains – little did we know that it was going to be a record year that exceeded all expectations.

The Bureau of Meteorology’s forecast of an extended La Nina event during spring and into summer has resulted in a very wet spring and the month of November is on track to be one of the highest rainfall months on record. The high rainfall has led to increased grass growth and more abundant flowering, resulting in the most exceptional grass pollen season on record.

The shape of the daily pollen count for this grass season is depicted in Figure 1, which shows the daily pollen count and level reported each day from September through to mid-November. EXTREME days are when the concentration is 100 or more grass pollen grains and these days are the worst for hay fever and asthma sufferers. So far this season there have been 13 EXTREME grass pollen days – we normally only see ~2 EXTREME days in a season – and this is twice as many as we recorded in our previous record year of 2020 when we saw 7 EXTREME days across the season. 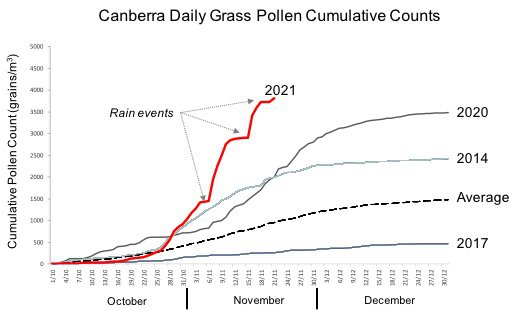 Is the record grass pollen season related to climate change?

The Canberra Pollen Monitoring Program has been recording daily pollen counts for over 10 years, and while this isn’t enough to clearly show that climate change is having an impact on the length, strength and nature of the pollen seasons, there are trends in the data that are of concern.

Studies in the Northern Hemisphere have shown that with greater levels of carbon dioxide in the air there is the potential for greater production of pollen – particularly in the grasses (Albertine et al. 2014, Ziska 2021). A recent study in Brisbane has led to similar conclusions on a short-term data set – with over 3x greater abundance of grass pollen recorded in the last 15 years of monitoring (Addison-Smith et al. 2021).

The recent record levels of grass pollen (and allergenic tree pollen) in the Canberra daily pollen count in 2021 and an increase in the number of people suffering from some form of allergic rhinitis in Canberra over the last few years are trends that are in line with expected effect of climate change on pollen production and human health.

This is one of the main reasons that it is important for us to continue to monitor the daily pollen count in Canberra so we can better understand the impacts of climate change on the air we breathe and the pollen count - helping those who suffer from hay fever and asthma to better adapt to future climate change impacts on respiratory health.

We’ll update you again in our end-of-year season wrap up or as any new information comes to light. In the meantime, keep checking the Canberra Pollen app and website for the latest information.