Why am I itching, wheezing and sneezing so much!?

This year has been full of “unprecedented” events and I have to forewarn you that if you decide to read on you will encounter yet another story of how unusual this year has been – in this case it relates to bioaerosols (or pollen and spores). If you live in Canberra you will be use to the itching, wheezing and sneezing that afflicts 1 in 3 people who live in our city and the region making us a hotspot for hay fever and asthma suffering in Australia. In October of this year we predicted that the approaching pollen season would be a big one, but we didn’t realize just how big it would be. 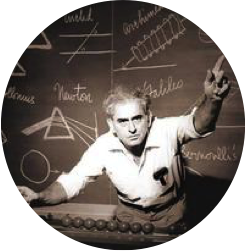 Why is it so? Unlike many of the major cities in Australia, Canberra is a landlocked city surrounded by an agricultural and pastural driven regional economy, resulting in the managed rural and urban landscapes we are familiar with today. One of the many attributes of being nestled amongst the montane environment of the southeastern Australian highlands is the suitability of the landscape for acclimatization of introduced plants from similar environments in the northern hemisphere. These pastures and urban treescapes are made up of many introduced species and some of produce abundant airborne pollen that cause hay fever or asthma.

Vegetation productivity is also a key variable that is making a difference this year. Bumper grass pollen years have occurred in the past when a wet winter/spring and above average soil moisture saw an increase in grass cover and vegetation productivity during the key months of September to November. During drought years the spring grass pollen levels are usually much lower.

The following three diagrams summarize the record of airborne pollen and spores counted daily by the Canberra Pollen Monitoring program at ANU and illustrate how spring 2020 can truly be given the “unprecedented” label.

A Pollen-ami of allergenic bioaerosols

The beginning of spring in Canberra ushered in a wonderful period of abundant flowers and verdant landscapes as the plants where given a chance – taken away by the drought and fire of previous years – to grow and produce foliage. There were hints of this abundance to be found in the waterways and footpaths of the city as yellow clouds of pollen could be seen dusting the environment.

This led to the waves of pollen that can be seen in Figure 1, where the a range of allergenic tree pollen types reached HIGH to EXTREME levels during the months of September and October. As the weeks progressed these waves of tree pollen were replaced by herbaceous pollen allergens as the grasses (mainly rye grass), plantain and paterson’s curse began to flower leading to a second but even more potent wave of airborne pollen throughout the month of November.

The allergenic fungal spore – Alternaria – is present throughout this period, though it increases in significance as the weather becomes warmer and periodic rainfall leads to ideal conditions for the fungus to produce abundant spores (usually 2-4 days after rainfall events). 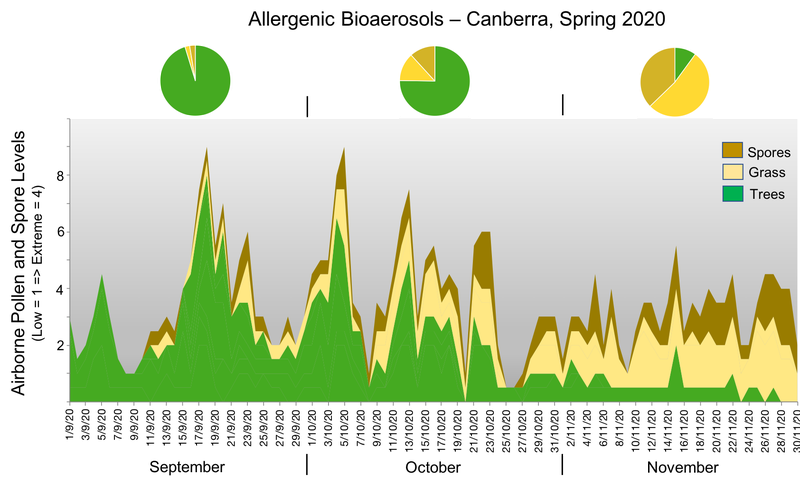 High and extreme days are our worst for hay fever and asthma. An average Canberra grass pollen season has only 5 high and 2 extreme grass pollen days. So far this season, we've had 14 high days and 7 extreme grass pollen days. This also resulted in 4 thunderstorm asthma warnings being issued for Canberra and the region during the spring months. These warning are generated when a prediction of extreme pollen levels coincides with the forecast of a thunderstorm – the consequences of which can be catastrophic (see information on thunderstorm asthma). None of these warning days appear to have resulted in a thunderstorm asthma event as the pollen counts show reduced to lower levels on the day of the forecast warning, due most likely to rainfall washing pollen out of the atmosphere as the storm front progressed. The potential for a thunderstorm asthma event is rare but remains very real and needs to be taken seriously when warnings are issued by ACT Health.

Notably, the anecdotal evidence is pointing towards an elevated number of people presenting to the Canberra hospital system for emergency attention, so much so that The Canberra Hospital has been overwhelmed with patients on some days in November. The cause of the elevated presentations is not yet clear, however, respiratory conditions have been cited as a leading factor and high pollen levels may be at least partly to blame.

Figure 2: Daily grass pollen counts for Canberra, September to November 2020. The histogram shows daily counts colour coded to match the accepted pollen levels reported by CanberraPollen.com.au. The days when a thunderstorm asthma warning was issued by ACT Health and the Bureau of Meteorology is indicated by a cloud and lightening symbol.

What to expect this summer

The grass pollen season still has a little way to go as we typically don’t see a decline in the pollen count until mid-late December. The graph in Figure 3 shows another way of tracking the season by plotting the cumulative grass pollen count since October 1. This year stands out as well above the average (n=10 years) and still tracking to be well above our highest year recorded in 2014.

Canberra is also known for a second grass pollen spike that occurs in mid-late January when a number of the warm season grasses flower (e.g. bermuda grass or Cynodon dactylon). If the wet weather continues into the summer, as predicted by the Bureau of Meteorology and the persistence of La Niña conditions, the second grass pollen spike may well be one to watch out for. In the meantime, keep checking the Canberra Pollen app and website for the latest information.