The grass pollen season for 2020 is all but over as we see the last vestiges of a record-breaking season hanging on with some MODERATE and LOW days through the last 2 weeks of December. The weather over the last 6 months played a key role in producing conditions suitable for the bumper grass pollen season of 2020. Elevated rainfall related to La Niña conditions in the Pacific Ocean and the persistent rains of spring and early summer around Canberra, resulted in high grassland productivity and a greater potential for grass pollen to be produced (Figure 1). 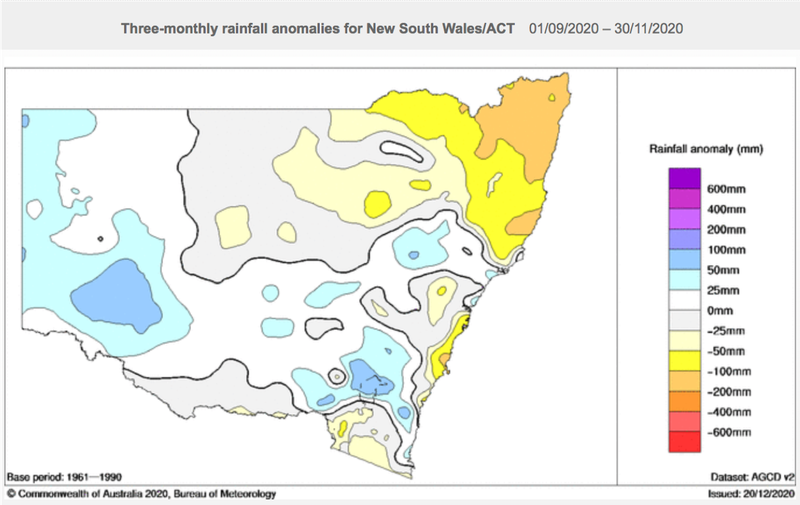 The graph in Figure 2 provides an update from the spring mid-season report where we track the season by plotting the cumulative grass pollen count since October 1. The final graph for 2020 compares this year with all previous grass pollen seasons for which we have data, confirming that this year stands out as well above the average (3x greater, n=10 sample years) and around 40% greater than the previous record high in 2014. Key features of the 2020 curve include: 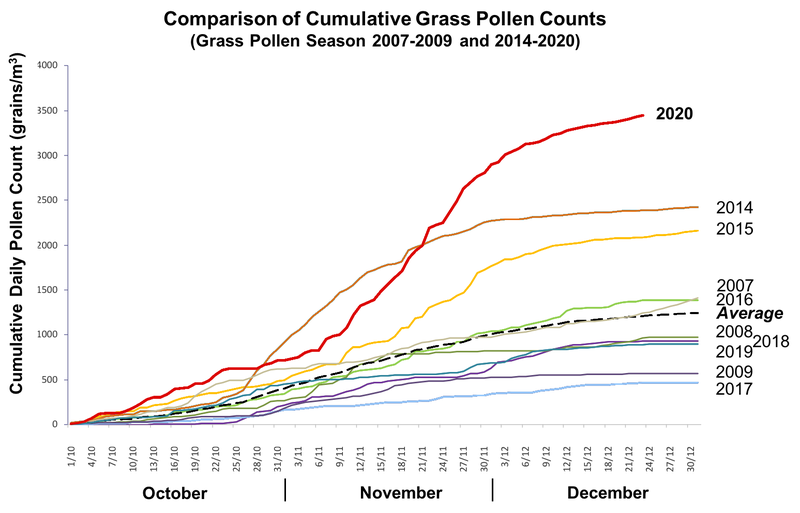 In Table 1 you can see that an average Canberra grass pollen season has 21 MODERATE, 4 HIGH and 1 EXTREME pollen days. The 2020 grass pollen season stands out as extraordinary, with record numbers for all measures used in this comparison, including twice as many EXTREME days than previously recorded in Canberra and the highest single day count of 193 pollen grains/m3 on the 22nd November.

Table 1: Summary of the number of days when the grass pollen count is MODERATE, HIGH or EXTREME, maximum recorded daily count (grains/m3) and total cumulative count for key seasons. Comparison is made between the lowest record season (2017), the highest record season before 2020 (2014), the overall average (2007-2009 and 2014-2019) and the 2020 grass pollen season. Total days in a grass pollen monitoring season = 92

A significant feature of this season was the issuing of 5 Thunderstorm Asthma warnings for the ACT, spread across either 1 or 2 days (see ACT Health website). These warnings were issued for the following days:

This is the first year that thunderstorm asthma warnings have been issued in the ACT. The impact of these warnings on Canberrans and our ability to mitigate the potential risks by following the ACT Health Thunderstorm Asthma advice is yet to be assessed, but it was clear that there were significant respiratory health issues emerging during the period that warnings were being issued. Three of these warnings occurred on weekends when the potential for people to be outside is likely to be higher - increasing the risk of Thunderstorm Asthma for vulnerable people. Anecdotal evidence certainly points to elevated pollen and potential thunderstorm asthma events contributing to the rise in people experiencing respiratory problems contributing to elevated levels of presentations to the hospitals across Canberra.

Thankfully, lower levels of grass pollen are now being recorded and are predicted to continue through to mid-January at least. A minor rise in grass pollen is to be expected in the mid-late January period and ongoing spikes in the allergenic fungal spore, Alternaria, are likely to continue during the summer months. For the latest information on these and other airborne allergens keep checking AirRater and the Canberra Pollen app and website