Is the Sneez’n Season Getting Longer and Stronger?

Lessons from the Northern Hemisphere point to the need for long-term monitoring of allergy related airborne pollen in Canberra and across Australia.

A recent study in the journal Lancet Planetary Health found that airborne pollen counts have been increasing across the northern hemisphere as average temperatures climbed (Ziska et al. 2019). The majority of the 17 cities studied show an increase in the amount of pollen and longer pollen seasons which the authors suggest can be explained by rising temperatures and increases in CO2 concentrations in the atmosphere over the past 20 years. This study is the first to show that these trends are happening, not just at a local scale, but are being recognized as significant on a global-hemispheric scale. This highlights the importance of considering the potential impacts of future temperature increases on health impacts, such as hay fever and asthma, around the globe.

Can we see similar trends in Australia? It is important to recognize that the Lancet Planetary Health analysis only reflects trends recorded in the northern hemisphere and efforts to bring together data from countries in the southern hemisphere, such as Australia, were not successful. One of the key reasons for this is that many countries, including Australia, do not have long-term pollen monitoring stations that run throughout the year, and where they do exist monitoring stations only occurs between peak grass pollen season from October to December of each year. This renders the analysis of other tree or herb pollen season length, many of which occur outside these times, as impossible.

Why do we need year-long monitoring of airborne pollen in Canberra?

Over 10 years ago in Australia the direct and indirect costs of allergic diseases were estimated at $7.8 billion annually (AIWH 2011), which on a per capita basis represents a $170 million dollar burden on a city the size of Canberra. In a recent Australian Bureau of Statistic report (ABS 2019) there is evidence that the level of burden has increased significantly over the last decade in Australia, with one of the highest increases reported in the ACT (29% or 1 in 3 people suffering from allergic rhinitis in 2017–18), representing an increase of ~10% since the previous survey conducted in 2007 (AIWH 2011).

Despite indications that an increasing number of Australians are suffering from allergic rhinitis in the last decade (Figure 1) there is no clear understanding of why this is occurring. There are a number of potential causes that could be considered: 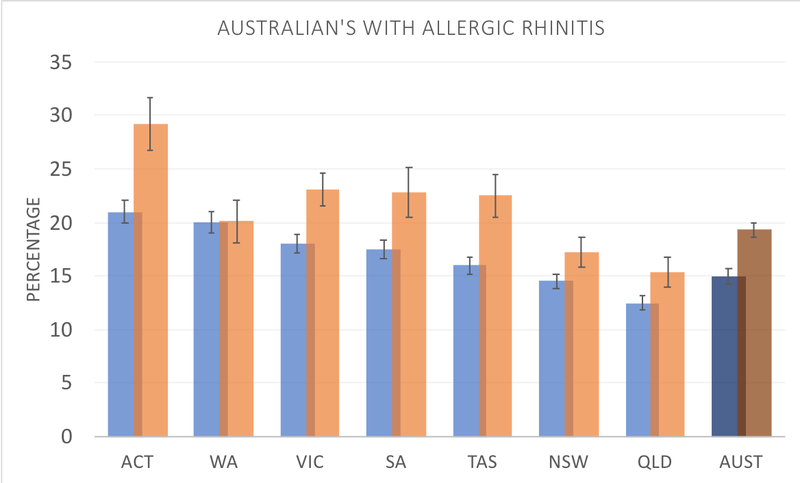 Figure 1. Allergic rhinitis is a medically and economically important chronic disease that affected 1 in 5 people living in the ACT in 2007. A recent survey in 2017/18 shows that has increased by ~10% in the last decade which is more than any other State or Territory in Australia. 2007 survey (blue shading) and 2017-18 survey (orange shading).

What is clear is that we will not be able to address any of these potential causes unless we have a better understanding of daily pollen abundance and dispersal across our population centres. In Canberra, where monitoring has occurred sporadically over the last decade it is possible to compare a full year of counts in 2008 with a full year in 2019. While this does not allow us to look at the long-term trends it does provide us with a snapshot of potential shifts occurring in this region. Figure 2 shows the onset and daily fluctuations in airborne concentrations of six major tree pollen types in our region (Olive, Cypress Pine, Betula, Elm, Poplar and Pine trees). The onset of the tree pollen season (first day total tree pollen>100 grains/m3) begins 4 days earlier in 2019 compared to 2008. The cumulative abundance of pollen recorded across this six week period is 2780 grains/m3 in 2008 as compared to 3400 grains/m3 in 2019 (~20% increase), though the proportion of each tree pollen type remains relatively stable. 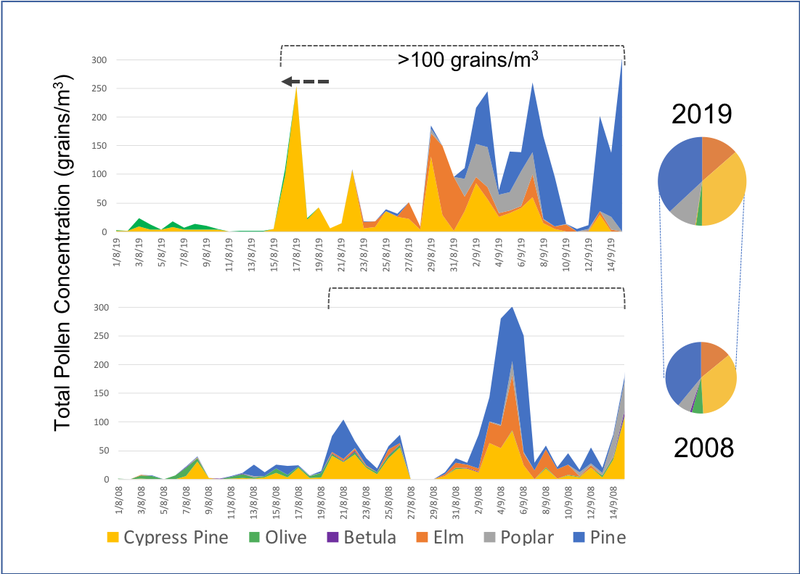 Figure 2. Comparison of onset of major tree pollen season in Canberra – 2008 vs 2019. The data is plotted from the 1st August to 15th September in each year and shows the onset and daily fluctuations in airborne concentrations of six major tree pollen types in our region (Olive, Cypress Pine, Betula, Elm, Poplar and Pine trees).

In order to show that these apparent differences are part of a long-term trend an important first step will be to increase the monitoring of airborne particles across the (expanding) urban landscape of cities such as Canberra. By increasing the data available for research, and the general public’s awareness of the impacts of different pollen types on population health and wellbeing, we can help to understand and begin to mitigate an increasingly significant health and economic burden Australian cities and townships. This will lead to reduced allergy symptoms, improved quality of life, and will empower sufferers to self-manage their condition.