The Grass pollen season begins with a bang in Canberra

The tree pollen season is all but over in Canberra but now the grass pollen season has started and is in full swing (or full sneeze!) 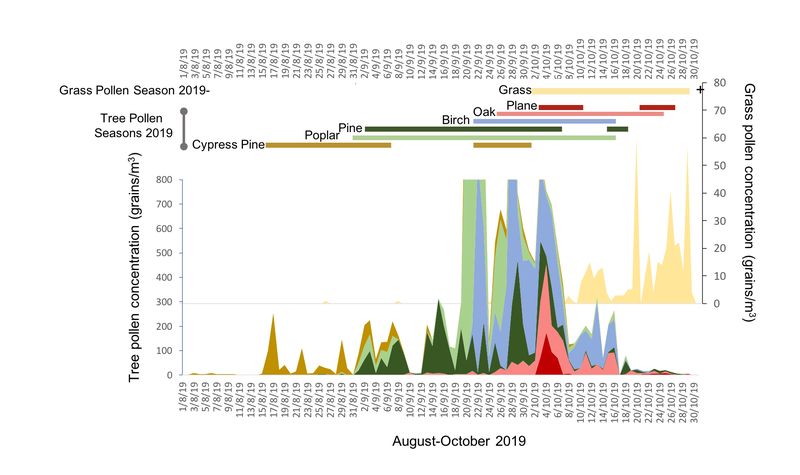 Figure 1. Selected tree and grass pollen taxa seasons for August to October 2019. The pollen amounts are expressed as stacked daily concentrations (grains/m3) and are colour coded to plant type. The horizontal bars represent the pollen season length for each plant type recorded in 2019.

What is the grass pollen season like this year?

Do you even have to ask the question I hear you say!? Its bad!... but yes it is also useful to know when grass pollen amounts are peaking and how long it will last. This is a key part of our research to understand the public health implications of allergenic pollen in one of the most affected cities in Australia (almost 1 in 3 people in Canberra experience hay fever). The pollen monitoring program in Canberra has been recording grass pollen levels since 2007 and the records can be compared to tell us how one years grass pollen season compares to the next. Figure 2 shows the cumulative grass pollen concentrations so far recorded in the spring of 2019 compared to the available data from previous years of grass pollen data collection between October to December. This year the amount of grass pollen is tracking to be at or slightly above average which is surprising for such a dry annual rainfall record so far. Despite the dry climate affecting the Canberra region throughout this year some late September rains may have have boosted the growth of grasses and grass pollen production in the ACT just enough to result in a slightly above average grass pollen seasonal start. We haven't yet reached the period of peak grass pollen production which is usually in November when the potential for HIGH to EXTREME grass pollen days increases and a greater number of Canberrans experience severe symptoms from pollen related allergic rhinitis. 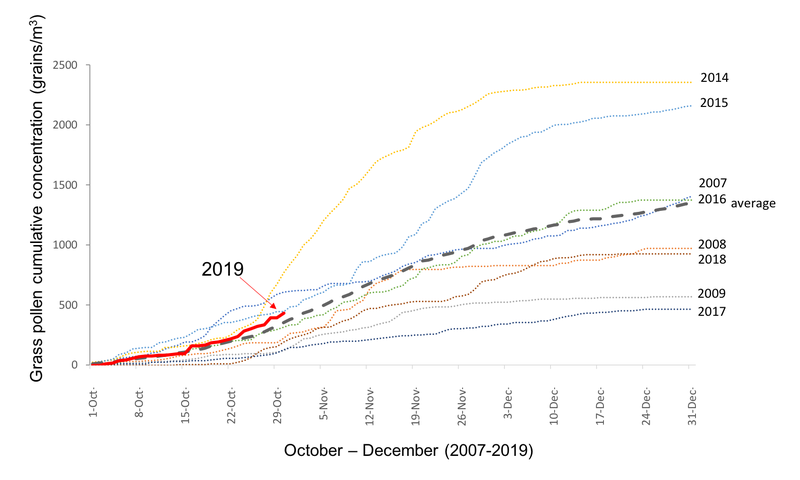 Figure 2. Comparison between cumulative grass pollen concentrations for years of record in Canberra from 2007 to 2019. The graph for 2019 (red) shows that this years grass pollen season is tracking at or slightly above average (black dashed line).

People with hay fever should learn asthma first aid, see their GP if they think they may also have asthma, follow their hay fever treatment plans and have asthma reliever medication suitably available. People with asthma should ensure they have had recent review with their doctor and achieved good control of symptoms. Also remember to take any prescribed preventer every day, even if no symptoms, have an asthma action plan that includes thunderstorm asthma, and always carry their asthma reliever with them.

Remember, everyone should avoid thunderstorms in grass pollen season (October-December and late January-early February) especially the wind gusts that proceed them. Grass pollen counts and forecasts will be available at www.canberrapollen.com.au and via our free mobile app and are updated daily at around 10:30am.