Canberrans are a resilient lot but this year their mettle is being tested by a bumper season of grass pollen in the air. How bad is it really? 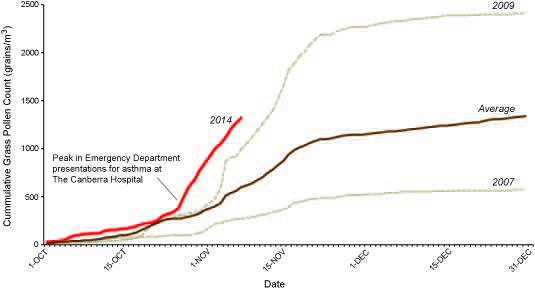 In an article published in The Conversation a month ago I suggested that Canberrans were in for a torrid time in the hay fever stakes. One of the reasons for this prediction was the observation that good winter rains followed by a mild to warm spring have produced conditions ideally suited to grass growth. In the previous decade the grassy paddocks that surround our city have at times been hit by drought and fires reducing grass growth and lowering the potential for flowering and pollen production.

Despite only having 4 years of pollen season data for Canberra (2007-2009 and 2014), we can get a sense of the difference between this years grass pollen season and the previous records depicted in the graph. What stands out is the significant gap between the all previous measures of cumulative pollen and the 2014 line. This in part is related to an earlier start to the rise in pollen count (last week of October), compared to other years where this rise in the graph starts around the 1st November. The steepening of the 2014 graph also coincides with the onset of the current record stretch of HIGH/EXTREME pollen days, which may have contributed to a spike in asthma-related presentations to The Canberra Hospital on the 26th October.

Our predictions suggest that this trend is set to continue for at least another week or two in Canberra and we are on track for one of the longest and highest levels of grass pollen recorded (compare this to the Melbourne record where they are having a very mild season).

Will this pattern of longer and more extreme pollen counts continue in the future? At this stage its too early to tell, but one thing is certain, we will only know for sure if we can continue to measure the pollen content of our air into the future and be able to use this research to keep the population of Canberra informed about the changing state of the pollen count.