Canberra is still the nations Hotspot for Hay fever – but not quite all of it!

Over the past 2 years (2014-2015) the Canberra Pollen app has been downloaded and used by over 11,000 people. The information generated from the mobile survey has allowed us to pinpoint suburbs within the ACT and immediate surrounds that recorded the most severe hay fever suffering during the 2014 and 2015 season (see Figure 1). The survey responses were broken down into five categories (ranging from no symptoms to severe symptoms) and these are displayed as the deviation from the mean response across the region. So those areas that are below zero (blue and green suburbs) all below average symptom responses. The suburbs that are yellow represent the mean response in the survey, and the suburbs that are orange or red all registered high level (above average) symptoms. The results show that there are a number of suburbs that continue to be well above the regional mean and can be considered as hotspots for hay fever (red suburbs). The hotspot suburbs include: Casey, Forde, and Franklin in Gungahlin; Melba, Holt and Higgins in Belconnon; Dickson and Reid in northern Canberra; and Macarthur, Gilmore, Isabella Plains and Calwell in Tuggeronong. 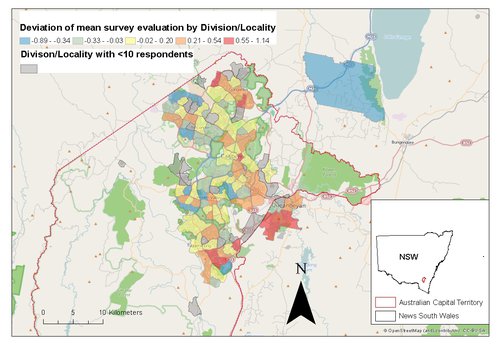 Most of these suburbs were reported last year as hotspots for hay fever, so the fact that in the second year of this survey we see the same areas recording hotspots for hay fever suggests that there may be some areas in the city that are worth avoiding if you suffer from severe hay fever or are susceptible to asthma attacks. The reason why these areas are hotspots remains unclear. Environmental factors are the likely to be at least in part causing these hotspots. The proximity of the Gungahlin, Belconnen and Tuggeronong suburbs to open pasture (grasslands) and pine plantations (particularly near Macarthur/Gilmore/Calwell and Holt/Higgins) may be a factor in those areas. The inner city suburbs of Reid and Dickson may be distant from grasslands but they have many streets lined with some highly allergenic trees such as the Plane Tree and Oak Trees.