The grass pollen season has been stubbornly slow in starting this year with LOW levels recorded through the first 2 weeks of October. In the last week of October all that changed with an unprecedented sudden and persistent rise of of grass pollen levels to HIGH and EXTREME.

In the last week of October we recorded a series of 6 straight days of EXTREME to HIGH grass pollen, including one of those days being a record for grass pollen for the last 10 years of sample collection (199 grains/m3 on the 29th October, 2021). Figure 1 shows the daily grass pollen counts for this season starting from 1st September through to the 1st November. The sudden rise of grass pollen to EXTREME levels (>100 grains/m3) starts on the 27th October, which is more than one week earlier than the first EXTREME grass pollen day recorded in 2020.

The slow start to this years grass pollen season is best explained by the cooler daily maximum temperatures in October (2 deg C cooler in 2021 than for the same time in 2020) with both years being characterised by high winter and spring rainfall. 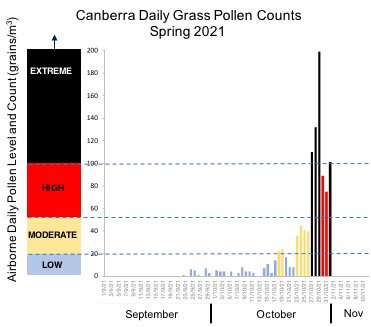 We will continue to monitor the daily grass pollen count to see if the season unfolds as it did in 2014 or if it matches or exceeds that recorded in 2020.

Either way it seems we are in for another bumper year of grass pollen. 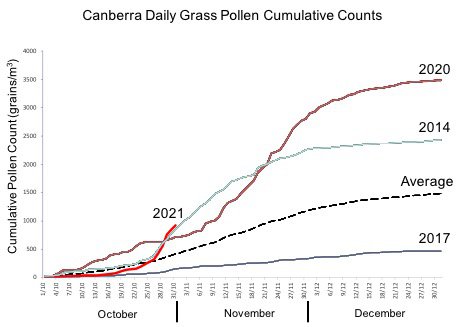