The "Big Sneeze" may be over but a little achoo remains!

Spores likely to remain a significant airborne allergen this summer

We have experienced a record breaking hay fever season this year in Canberra and while the signs are positive that the "Big Sneeze" is over there are still airborne allergens that we need to be aware of during the summer holiday period. The spore released by Alternaria, a genus of ascomycete fungi, is a well-recognized airborne allergen. Alternaria can be found on leaves and stems of plants (including grass) and within soils. Mowing lawns in urban environments and harvesting crops in rural environments can contribute to increasing the abundance of spores in the air. Alternaria spores can be detected from spring through late Autumn in most temperate areas, and can reach levels of thousands of spores per cubic meter of air, particularly during dry, windy conditions, following a period of rain.

The relatively wet conditions we are experiencing in SE Australia due to the current La Niña conditions have resulted in a wet and warm spring, a pattern that is likely to continue through the summer months (BOM outlook for summer). This will increase the chance of days with elevated Alternaria spore counts. Our observations suggest that high spore counts can be expected 2-4 days after a rainfall event, though this may not always be the case (Figure 1).

So be aware of the risk and take precautions if you are sensitive to Alternaria, and always seek advice from your GP if you are feeling unwell. 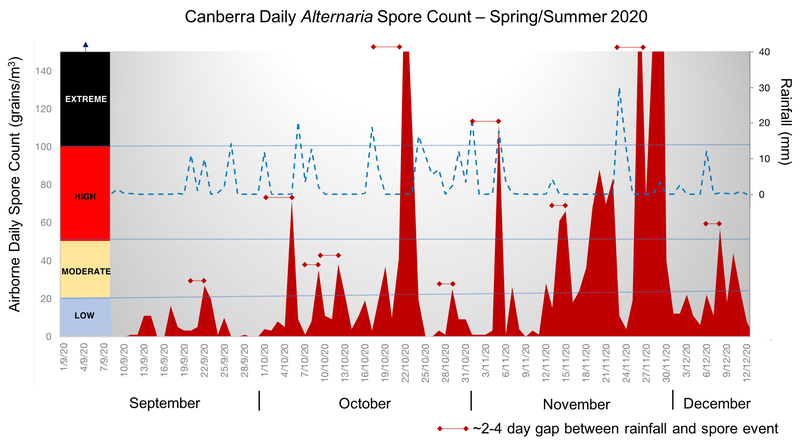 Figure 1. Daily Alternaria spore counts for Canberra, September to mid-December 2020. The maroon curve shows daily counts for the allergenic spore Alternaria. Daily rainfall for Canberra recorded across the same time is shown by the blue dotted line. In general, there appears to be a 2-4 day lag between a rainfall event and an Alternaria spore event, however, this pattern does not always hold.