Autumn and Hay Fever in Canberra

What's in the air we breath this Autumn?

Autumn in Canberra is not usually considered to be a time of hay fever, but this year the Canberra Pollen Monitoring Program is hearing a different story. There have been many people reporting suffering from hay fever or asthma, particularly during the months of March and April.

Why is this so? We take a closer look at the daily pollen count and bring to you some of the potential culprits we've seen floating around in the airborne pollen and spore biome of Canberra that may be causing your wheezing and sneezing.

The pollen seasons for the main allergenic pollen types recorded during early to mid Autumn are depicted in Figure 1. There are clear periods of Moderate to High pollen abundance, particularly in the first 2 weeks of March when Casuarina, grass, Chinese Elm and Alternaria spores all play a significant part in the airborne pollen spectra. After a period of heavy rainfall between the 15-25 March, a peak in Cedar and Alder pollen occurred during the first half of April in combination with a persistent rise in Alternaria spores from 25 March to 16 April. The last 2 weeks of April saw the decline of all pollen taxa to very Low levels, signalling the onset of cooler temperatures and the end of allergenic pollen production in Canberra. 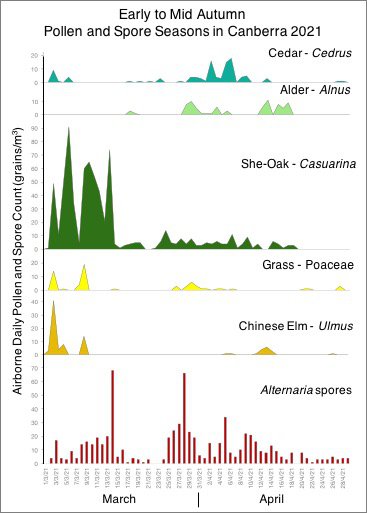 Figure 1. Daily pollen counts for trees and herbs that produce allergenic pollen and spores during the months of March and April (2021).

The most prominent and persistent airborne allergen recorded during the Autumn months is the Alternaria spore, which can be present at any time throughout the year but is particularly prominent during the warmer months and following rainfall events. This pattern is clearly depicted in Figure 2 where Alternaria spores increase 2-4 days after a rainfall event and can remain elevated for a week or more. Cooler temperatures across the region after the 10th April appear to have moderately suppressed Alternaria abundance. 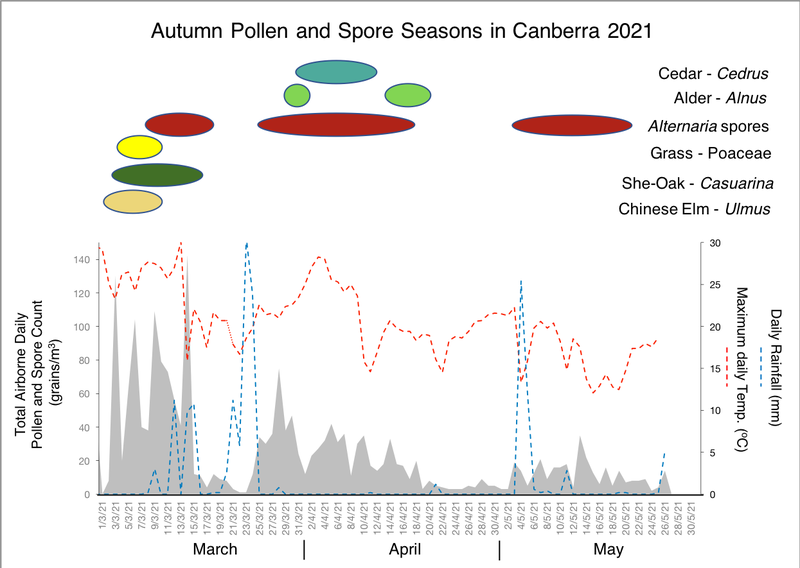 We are now entering the winter months and we can expect a period of respite (June to early July) from widely dispersed airborne allergens. It is important to remember that allergenic spores, including Alternaria, may continue to flare up in your local environment such as in the garden or in indoor settings. The Canberra Pollen team will continue to monitor our airborne pollen and spore count during the winter months and bring you the latest research in aerobiology in Australia and around the globe.